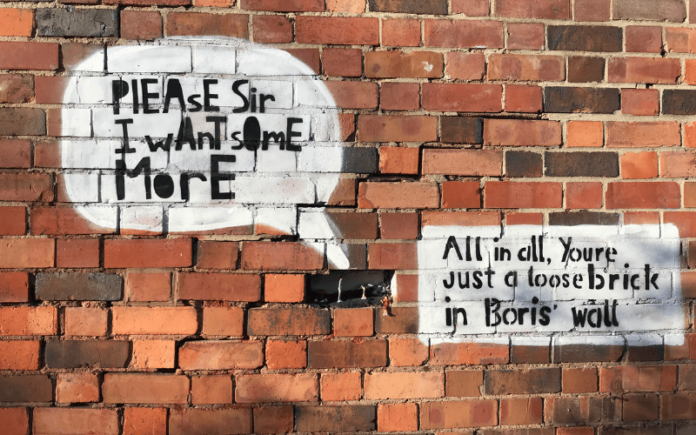 A mystery Nottingham artist has used a hidden away miniature street-art installation to criticise the government’s free school meals controversy.

Spray painted speech bubbles and posed figures appeared on Castle Boulevard next to the canal bridge by Akhter’s accountants.

It was first noticed on the afternoon of Saturday, October 31.

In the space of a missing brick in the wall several miniatures and speech stencilled onto the wall depict two children looking towards a man and asking for food.

Mr Ugbeikwu said: “There was no name or sign of who had created it at all.

It references Oliver Twist with the figures asking for more in a speech bubble while another invokes Pink Floyd: “All in all. You’re just a loose brick in Boris’ wall.”

He added: “I’m speculating but I think it’s about how a lot of government policies may be for an agenda rather than for the public.”

The anonymous painter has not been identified or claimed the street-art.

“I’m wondering here if somebody built a little scene and then someone else put the political message around it because it doesn’t exactly match which is interesting.

“That’s not too important though as it’s pretty clearly a commentary and protest which references universally known critiques of the education system and food shortages by Dickens and Pink Floyd.

“It’s easier to ignore things in Twitter feeds because they disappear but it’s hard to ignore something painted on the wall by your house – its visually imposing.”

Dr Mitman, 39, added: “There has never been a time where the streets have been as empty, where police have been as distracted and where you’ve been encouraged to cover your face, it’s the perfect storm.

“I’m seeing a lot more and better-quality graffiti now than in the past few years.”

In October Nottingham made national headlines due to another piece of public art.

An illustration that showed a girl playing with a hula hoop appeared on Ilkeston Road on October 15.

World-famous graffiti artist Banksy confirmed the painting in Nottingham was his work through Instagram on October 18.