A Basford Food Bank is unable to meet demand following the recent spike in covid cases and concerns in the area.

Mesopotamia, on Valley Road, delivers packages of fresh food weekly to the residents of the area that need it most.

“We are currently delivering two-thirds that amount despite demand being just as high as previous.

“As we head towards a second lockdown, we’re worried about the amount of people that will be asking us for support.”

The charity is fully funded by the conjoining shop and the workforce is on a completely voluntary basis.

They currently receive no support from local government.

Ms Miller added:  “It is alarming how many people approach us who are self-employed, or not from the impoverished areas that you might expect.

“Small business owners are struggling due to reduced footfall, as well as restrictions imposed by the authorities.

“We encourage anybody who needs our help to approach us, that’s what we’re here for.

“Sadly with no support from local government we’re so limited with what we can do.”

The charity has become a community hub since operations began in 2014, but has sadly had to close it’s café due to funding issues.

“The café was a fantastic thing to give some elderly and lonely residents somewhere to go, and some company.

“We simply don’t have the resources to fund it anymore.”

Blind-eye- the local charity which aids the homeless, has benefitted from Mesopotamia’s generosity during the pandemic.

They have been reliant on food packages they have received after failing to receive support from local government.

Director Darren Lightfoot said: “Charities across the board are suffering right now, in a time where we’re probably needed the most.

“We were promised funding back in May to reflect our importance but we still haven’t received anything.

“Rachel and others have been such a great help for us and without them we wouldn’t have been able to do the vital work we do.

“As fantastic as that is, we shouldn’t have to be as reliant as we are on the generosity of other local charities.”

The Council has been forced into £12.5 million of budget cuts, affecting investment plans for projects such as these.

Councillor Sam Webster said:  “We had to make some extremely difficult decisions based in government cuts.

“Sadly we cannot provide support for some of the services that our most vulnerable residents rely.” 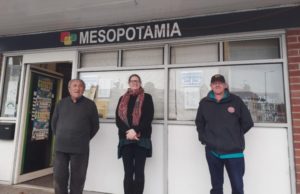