When it’s not safe to walk, get a taxi or an Uber or get public transport home, you have a clear problem which society needs to address.

Being a woman in the 21st century, you’d think that sexist and misogynistic values would have been axed by now. Women wish this too.

However the harsh reality of recent data shows that violence against women is on the rise.

It would be thought that in a world where women finally have the right to work, to vote and to finally do all things men can do, we wouldn’t have to be protesting on the street for men to stop killing us for our gender.

According to the Crime Survey for England and Wales (CSEW), statistics show that the year ending March 2020, an estimated 5.5% of adults ages 16 to 74 have experienced domestic abuse.

In previous years, this percentage was around 4% by a partner or ex partner and 1.9% by a family member.

The data set also presents that women are more likely to face these forms of violence than men by more than double. 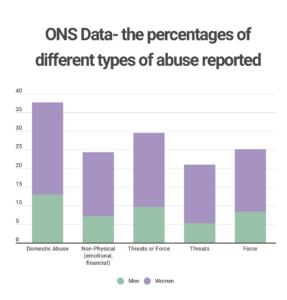 The World Health Organisation published a report on the matter, stating: “Violence against women is preventable.

“The health sector has an important role to play to provide comprehensive health care to women subjected to violence, and as an entry point for referring women to other support services they may need.”

Violence against women comes in more forms than domestic abuse, also with issues such as sexual violence, stalking and harassment.

The increase of these crimes has been a large issue many people are urging to tackle.

This led to a YouGov survey to be completed by UN Women UK which found that 97% of UK females aged between 18-24 have experienced sexual harassment, and only 4% follow through with reports. 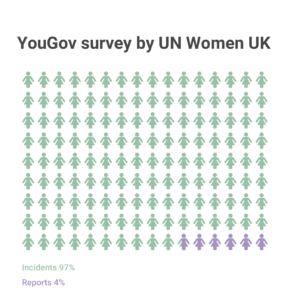 It has been said that the lack of reports of these incidents is due to the fact that victims believe nothing will be done.

This led to large societal backlashes, protests and a demand for some form of reform.

Many people are showing solidarity with their female peers after this shocking statistic was released.

In Nottingham, a women’s only self-defence class was held in aim to help women feel safer within themselves.

Lewis Joshi, a 22-year-old Nottingham Trent University business student, was one of many who put his skills to use.

On Saturday the 20th March at the Arboretum, he facilitated a class to teach women certain means of self protection.

The session taught four different techniques which could be used to protect themselves if they ever find themselves in a dangerous environment.

Lewis said: “That one technique could save their life.”

After recent women’s rights protests, Lewis decided to use his 19 years of Taekwondo and boxing experience to make Nottingham women feel safer on the streets.

He continued: “I’ve been wanting to do something like this for a long time, I’m a very big activist when it comes to women’s rights and equal rights in general.

“It come down to my mum who is a very string feminist who has never let me be sexist or misogynistic.

“It’s horrible you guys have to go through that every time you leave the house.

“It’s heart breaking and it’s one of the biggest issues we need to tackle.

“There are techniques people can learn and knowing you have that arsenal in your body gives you a new level of confidence.

He also be produced and distributed cue cards for attendees to take away with them to remember what they learned which also meant those who wanted to could continue practicing in their own time, building their strength, ability and confidence to the level they wanted to.

Emily Hoang, a 20-year-old law student also at Nottingham Trent, worked alongside Lewis as a female host to make the environment more comfortable for women as many could have potentially been nervous approaching a male in this environment.

After the physical activities, she offered a safe place for participants to share their stories and talk about their experiences openly which created a great space for those who wanted to air out their concerns, or form bonds with those who have experienced similar things to them; it created a safe community.

“I wanted to make it apparent to the women who want to come, because it could be daunting doing it in public or with a male trainer, that it’s a safe place.”

The class was run successfully and many participants learned valuable skills to protect themselves when needed.

The data informs us that classes such as these could now be necessary in order for women to feel safe and that the people who are running these classes, such as Josh and Emily, are doing their bit within their community to help do just this.

It’s comforting for many women knowing that they have allies, and that there are men in street who would run to their defence if need be, however it’s a devastating reality that this is still the way the world works.

In a world sadly still filled with apparent inequalities, it is so important we are kind to each other, support each other and also showing you are an ally in anyway possible.

Injustices can only be fought by those who refuse to conform to them anymore, and those helping women feel safer on the streets are providing a stepping stone towards dismantling the thoughts that violence against women is justifiable.