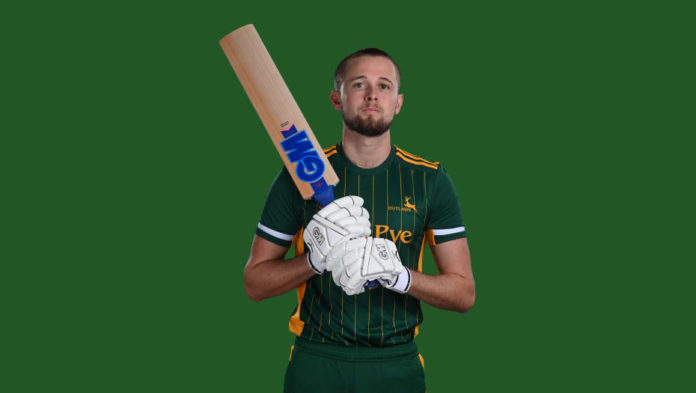 Sol Budinger decimated Derbyshire yesterday with a 31-ball hundred, helping Notts to a seven-wicket victory away to their Midlands rivals.

The 21-year-old entered the fray at number 3 only four balls into the Notts innings following the early loss of opener Joey Evison, and the explosive left-hander hit 13 sixes on his way to a match-winning 114.

The innings was just one ball away from equalling Chris Gayle’s T20 world record 30-ball hundred, which he amassed as part of a record-shattering unbeaten 175 back in the 2013 IPL for Royal Challengers Bangalore.

The Second XI T20 North Group fixture, which took place at Repton School, saw Derbyshire finish up on 205-6, which Notts chased down with seven wickets and four overs to spare.

Ben Slater also impressed for the away side, with a quick-fire 64 from 37 deliveries, while Liam Patterson-White was the pick of the bowlers, taking two important wickets and helping to slow Derbyshire’s run rate.

After winning the toss, Derbyshire made a swift start with the bat, climbing to 70 before Budinger had Anuj Dal caught by Ben Compton on the penultimate ball of the powerplay for 28.

Academy graduate duo Patterson-White and Lyndon James paired to further halt the Derbyshire momentum, the former taking the wicket of Tom Wood for 50 before the latter had Mitchell Wagstaff caught by Evison in the 13th over.

Patterson-White got his second an over later, Harvey Hosein gifting Ben Compton his third catch with the hosts on 135.

Mattie McKiernan added 32 off 18 in an impressive cameo alongside Oskar Kolk, who himself contributed 27, as Derbyshire accelerated in the latter stages of their allocated overs, with 70 runs coming from the final 39 deliveries.

Budinger made light work of the reply, however, easing himself in for two deliveries before launching Cohen for three sixes in the second over and dismissing Ben Hutchinson for four sixes in the fourth.

Thirteen minutes after arriving at the crease, he had his fifty.

Slater batted with fluency when given the opportunity, and the pair had added 147 by the time Budinger was dismissed in the 11th over having faced just 38 balls.

With Notts requiring 56 more for the victory, left-hander Slater assumed control and pressed on himself, bringing up his fifty off 33 balls to steer the Green and Golds towards victory with James for company.

When Slater departed, Nottinghamshire required just 14 from 36 deliveries, a task completed within 11 with James and Patterson-White at the crease.

However the victory was not enough to see Nottinghamshire vacate the bottom spot in their group, where they sit with only six points from their first 10 games.