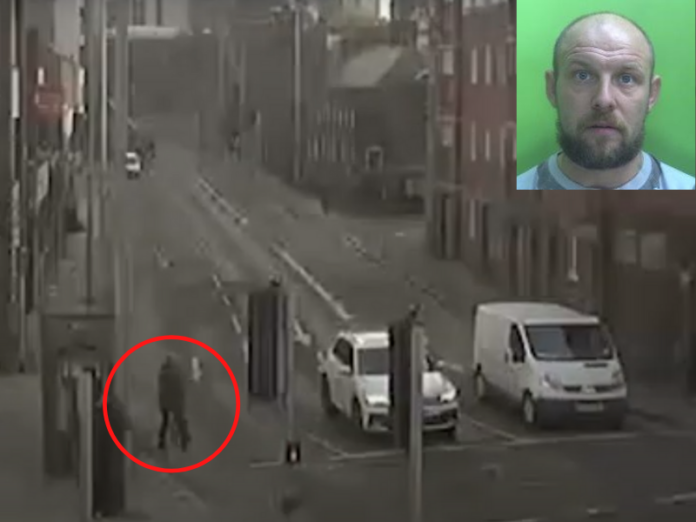 A robbery victim has described the moment a stranger crept into the back seat of her car while she sat in traffic like a ‘scene from a horror movie’.

Nottinghamshire police have released CCTV footage showing the man crossing the street in Nottingham city centre, before opening the victim’s backdoor and jumping in as the vehicle pulled away.

The victim didn’t spot the man hiding behind her seat until she looked in the rear-view mirror, making her scream out.

Steve Partington had woken up lost in Nottingham after a drink and drugs binge after being released from police custody in Mansfield.

Once inside the victim’s car, he told her to ‘stay calm’ and ‘drive’ while he sat in the footwell.

The 40-year-old victim, who had been running errands, tried to alert pedestrians and other drivers by beeping her horn and banging on her window.

She said: “I was in my car listening to the radio and suddenly I felt a movement in the car.

“I just had a quick glance into the mirror and there he was.

“I instantly screamed out.

“It was like a scene from a horror movie.

“Suddenly I wasn’t alone in the car.

“Then I thought was this a mistake, did he think I was a taxi? Was it all a misunderstanding? He wasn’t talkative, he wasn’t chatty, all he said to me was ‘stay calm’. He wasn’t panicky or aggressive.

“At that point I had no idea what his intentions were. Was he dangerous? What does he want from me? Does he have a weapon on him? Is he a rapist? Is he going to want me to go somewhere?”

The victim said that after she came out of the initial shock, she thought about how she was going to get him out of the car.

She added: “I began beeping my horn and banging on the windows to anyone around, but no one really paid much attention.

“He just told me to ‘drive’ and I decided to turn down a side street, where I thought there might be more people, but my heart-sank… it was deserted.

“He then began feeling around, touching the arm-rest and then he touched my sleeve – that really freaked me out.

“I tried to lean out the window and keep away from him. I felt completely helpless. I should be in control in my own car.

“He then grabbed my handbag and he got out the car.

“Just like that, it was over. It only lasted a few minutes, but to me it felt like a lifetime.

“I immediately locked myself in, drove home and rang the police.”

An investigation was immediately launched and a breakthrough came when a member of the public found the stolen handbag in a city centre care park.

Alongside the victim’s property was a green coat containing bail paperwork in Steve Partington’s name that had been issued early that morning after he had spent a night in a cell.

Footage was used to trace his movements from Mansfield to Nottingham, and footage from just before the incident shows him wearing the same coat.

Further footage from later in the day shows him without the coat, which he had left with the victim’s handbag.

Partington was arrested on 22 November 2020 and charged, before being remanded into custody.

The terrified woman positively identified the offender in an identification process.

Partington, 44, of no fixed address, appeared at Nottingham Crown Court on Wednesday, 16 June having pleaded guilty to robbery in January. 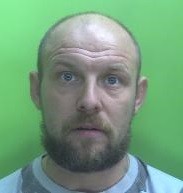 He was sentenced to four years’ and eight months imprisonment.

Leading up to the incident Partington been drinking and using drugs, waking up at various locations during excessive use.

He wasn’t familiar with Nottingham and couldn’t recall his movements on 7 November 2020 after he had been released from Mansfield custody suite.

The victim praised the work of the officers who led the investigation, stating that she was constantly updated and everything was handled professionally.

She said: “I think it only hit me afterwards the seriousness of it all, when the shock had died down.

“When the arrest came in, I felt so relieved. I can’t fault the force’s robbery team.

“It really affected me, I didn’t want to leave the home.

“I was so anxious, I didn’t want to be alone or go anywhere, but as I had heard that he had been arrested I felt calmer and safer straight away.

“This sentencing will give me closure, it will draw a line under it all. I feel I can move on now, it’s been a really scary period of my life.”

He commended the victim’s bravery throughout the investigation, and hoped that the sentence could give her some closure.

He said: “This was a particularly harrowing and a very alarming incident, which initially left the victim traumatised.

“She was extremely frightened and did not know what Partington’s intentions were. Officers supported the woman who was clearly distressed. Thankfully she didn’t suffer any injuries.

“Following a hugely detailed investigation, which focussed on hours of CCTV footage from Nottingham and Mansfield, we were able to trace Partington’s movements.

“We’d like to thank the member of the public who recovered the victim’s items, along with Partington’s coat, which was crucial to solve the case.

“The investigation was led by the city dedicated robbery team but to bring matters to a successful conclusion we received support from officers and staff across the force.

“I’d like to thank everyone who contributed including Derbyshire Constabulary and British Transport Police.

“Our approach required methodically gathering the evidence and we ensured that no stone was left unturned.”