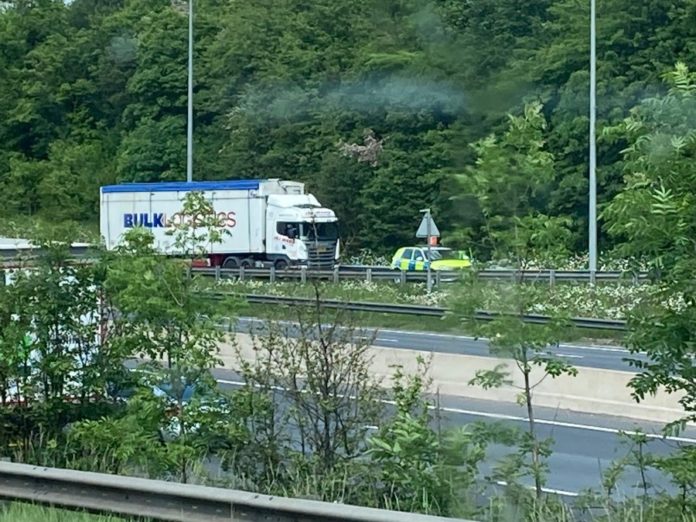 Unsuspected drivers were caught out for seatbelts offences and using their mobile phone as police went undercover in a heavy goods vehicle.

Policing officers headed out across Nottinghamshire’s roads to crack down on illegal and dangerous driving.

Out of 32 stops, 30 traffic offence reports are being issued.

Four offences were for using a mobile phone and 28 for not wearing a seatbelt.

Sergeant Craig Luckett, of Nottinghamshire’s roads policing team, said: “It’s great to have been able to use the HGV from Highways England which allows us to drive alongside vehicles and record unsafe driving behaviour before stopping the offending drivers.

“It just goes to show that you never know when you are being recorded for illegal activities behind the wheel. We also regularly receive dash-cam and mobile phone footage of these offences which we always investigate.

“One of the things we noticed during the operation was that lots of the drivers stopped for not wearing a seatbelt, had the belt already clipped in behind them which is quite shocking and difficult to understand why they’d go to this effort which is still dangerous and still an offence.”

The operation was part of a campaign called Global Road Safety week and the national seatbelt operation.

Marie Biddulph, Highways England assistant regional safety co-ordinator, said: “We work very closely with our police partners to target that minority of drivers who flout the law and put themselves and others at risk.

“It is particularly disappointing that so many people fail to recognise the dangers of not wearing a seatbelt or using mobile phones while driving. Thanks to the elevated position in our unmarked HGV cabs, police officers can now spot these offences – whatever vehicle the drivers are in.

“We hope this operation will encourage all road users to think more carefully about their driving behaviour and help improve safety on our roads.”

A new community speed watch group has been set up in Bilsthorpe alongside the Ollerton safer neighbourhood team.

Sergeant Luckett added: “We’re committed to ensuring our roads are safe and these operations have given us the opportunity to dedicate resources to combatting ‘fatal four’ incidents and work collaboratively with local teams across the force to really bring home how important it is to adhere to driving regulations.

“It’s so important to abide by the laws in relation to speeding, wearing a seatbelt, using a mobile phone and of course drink and drug-driving. It’s proven that flouting them is so dangerous and has led to some very tragic incidents on our roads. We’ve seen first-hand the devastating impact on families and friends after losing a loved one in a way that could have been prevented.

“The laws are simply there to save lives and our activity to crackdown on dangerous driving continues on a daily basis throughout Nottinghamshire.”