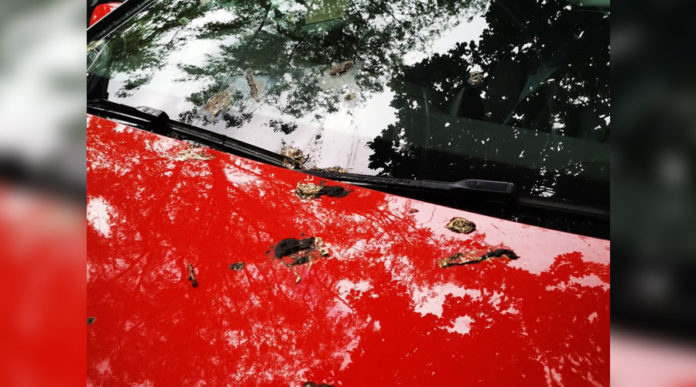 A Nottinghamshire village is being blighted by an ‘abnormal number’ of pigeons.

Residents in Calverton claim there has been an explosion in the population of the winged pests.

Gardens, cars, and children’s outdoor toys are being continually covered in pigeon droppings and the birds are disturbing villagers’ sleep.

Matt Walters, 31, a Calverton resident says there are more of the animals this year.

He said: “Everywhere you look they are on rooftops, in gardens, on fences, lampposts, nesting in all the available trees in the area.

“We have an abnormal number of pigeons around the area this year.

“The biggest problem with them is excrement and noise.

“Frequently they wake everybody in the house up at early hours in the morning either cooing or fighting on the roof.”

Mr Walters is not alone in his complaints, Kirsty Green, 47, has lived in Calverton village for 17 years and has labelled the pigeons as “flying rats”.

She said: “They sh*t all over the kid’s toys and trampoline.

“I find it rather disgusting and a health hazard for little kids especially babies.

“I’ve hardly seen any other wildlife or other birds as the pigeons seemed to have took over.”

Ms Green explains the pigeons have now begun to steal food that was left out for visiting hedgehogs.

She added: “There’s just far too many and I’m afraid I see them as flying rats.

“I put food out for a hedgehog that we have visit often and the bloody pigeons come and eat it.”

Another resident stressed it was not just the mess they left behind, but also the “irritating noise” they make along with the “bullying of smaller birds”.

Under the Wildlife and Countryside Act of 1981, pigeons can only be repelled from areas.

The Gedling Borough Council was contacted in regards to culling but they said they were not responsible for managing wildlife populations.