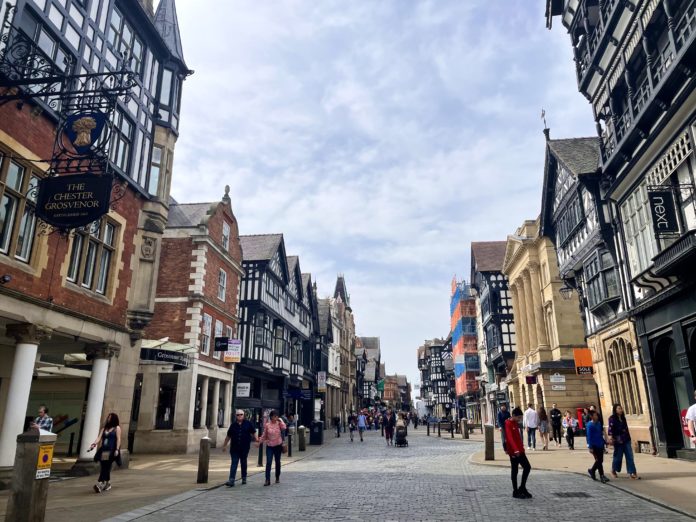 The pandemic is being blamed for the downfall of town centre shopping but the issues began well before any lockdowns. Sophie Dalton asks is the growing success of the out of town retail parks the real culprit?

As you walk down the cobbled streets in Chester town centre the idyllic Roman features do little to disguise the countless number of store units left empty.

Like many others the once bustling city has fallen almost dormant in recent years and new businesses rarely stay afloat for more than a year on the high street.

Many blame the multiple lockdowns for the demise of the city however, the problem arose much earlier with the advent of out-of-town retail parks steering customers away from the high street and into their modern and ‘more convenient’ malls

In 2019 a record number of 26 stores closed in Chester city centre when just 12 months earlier seven miles down the road McArthur Glen spent £40 million on the Cheshire Oaks shopping centre introducing 25 new outlets to the site.

Shops that ceased to exist during this time included: Clintons, Office, H. Samuel, The Alchemist, Laura Ashley, Footlocker and perhaps the most significant Browns of Chester.

The decline in popularity of high street shopping has become such a concern it has been dubbed ‘the death of the high street’ and can be traced back to the innovation of retail parks outside of city centres.

These became more popular during the 1960s when many households bought their first car and it became easier to travel further out to shop.

Sites such as these offer vast, free carparks; a huge selection of shops and eateries and cheaper rent than high streets making them more attractive to both brands and consumers.

Since the closure of the market car park, Chester has a limited number of places to park all of which cost a hefty amount to use for the day.

This pushes people towards Cheshire Oaks which offers free parking all day everyday.

Chester high street has one of the highest average rent prices in the North at £1950 per square foot per annum which could be the reason so many brands have abandoned their setting on the high street and opted to move to the retail park alongside the M53.

When I asked her why the brand decided to continue trading on Cheshire Oaks and cease on the high street she said: “Our rent in Chester was very high, the buildings are historic and very beautiful but the foot traffic in the area just didn’t support our costs there.

“Days in the store on Foregate Street were very quiet mostly.

“I’m surprised it survived there as long as it did.

“It’s a vast difference to our Cheshire Oaks outlet which has been thriving since the day it opened in 2012 and the running costs are much lower on the site.

“I think that was the main reason behind the decision.”

In addition to Jack Wills businesses such as Thorntons, Yankee Candle and Molton Brown have chosen to close their Chester sites and continue to trade at the outlet village.

I spoke to locals around the high street about the effect they thought Cheshire Oaks was having on the city centre.

“If you’re looking for convenience then that’s where you’d shop.

“In the town centre parking can be pricey and if you’re just looking to pop in and out of somewhere in hour it feels silly to pay.”

The declining number of visits to town centres can be seen in data as early as 2008.

During the years 2008-2011 high street footfall across the country fell by 10.4% while out-of-town centres enjoyed a 14% increase at the same time.

From 2012 to 2017 businesses also saw better growth outside of high street shopping areas with an overall growth of 6% across Great Britain.

Since it opened in 1995 Cheshire Oaks has gone from strength to strength now welcoming over eight-million guests per year making it the most popular attraction in the North West.

In 2013 while other retail areas suffered some of the worst numbers in history brands on Cheshire Oaks saw a 15% sales growth and 5% increase in footfall.

In recent years Cheshire West and Chester council have made great efforts to re-invent the city and inject some life back into the Roman walls.

The Northgate Development has been a 40-million-pound project that aims to protect the well-loved staple businesses of Chester while giving them a new lease of life to keep up with the ever-expanding McArthur Glen complex.

Labour Councillor Samantha Dixon for Chester City and the Garden Quarter said: “This scheme has been a long time in the making as covid put a hold on building.

“The Town and High Street Commission’s aim was to incorporate some of Chester’s beautiful architecture and include modern touches.

“The plan has involved renovating the old library into a new building that houses the newly renovated market and many other businesses.

“The hope is that in creating this new space that links together with the Story House we provide an area where businesses can thrive.”

The Story House opened in 2017 taking over the old Odeon building and transforming it into a multi-use cultural space for arts, music and literature.

The Northgate Development will also include parking facilities to combat the issue of lack of car parks.

Councillor Dixon added: “We recognise that parking in Chester has become more difficult since the closure of the old market car park.

It seems that Chester is not ready to give up the fight against the outlet mall.

Only time will tell if the newly improved Northgate quarter will once again have people swarming in their thousands to shop on the high street.